Meet the Pearl of the South of Cuba, Cienfuegos, and enjoy its maritime environment and its natural landscapes

The city of Cienfuegos, which was founded in 1819 in Cuba, retains a fairly homogeneous urban core in terms of architecture, full of classic facades and slender columns that provide an environment reminiscent of nineteenth-century France in which it was inspired. In fact, the city was founded by a French emigrant (Don Luis D’Clouet).

Cienfuegos is known as the “Pearl of the South of Cuba” and it is not surprising, since this small city has managed to seduce travelers from all over the world thanks to the mixture of the elegance of its cultivated French spirit and its friendly Caribbean style . In the bay itself you can read a sign that says “The city that I like the most”, citing the words that the famous singer Benny Moré said.

Cienfuegos is a nautical city that is arranged around the largest natural bay in Cuba. The entire city enjoys an enviable maritime environment, which, together with the tranquility that is breathed in its renewed streets free of tourist crowds, were some of the keys for it to be declared a UNESCO world heritage in 2005. It is a colorful city where the emerald green tones of its lush lands and the turquoise blue of its waters stand out. The province is full of small coves, caves and coral reefs; but its main course is really inside, in El Nicho, a lush natural enclave located within the Topes de Collantes Natural Park. 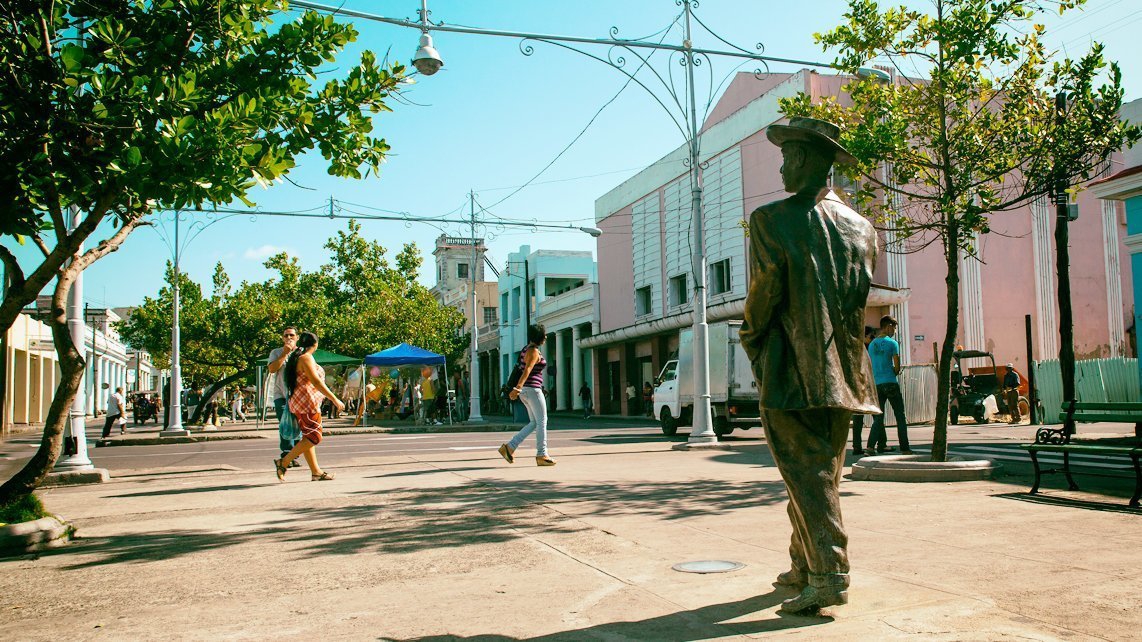 The province can be divided into two distinct areas: the central zone, where the Prado and the Parque Martí are located; and Punta Gorda, a small territory that cuts the bay and houses numerous eclectic palaces dating from the early twentieth century.

The most interesting points of interest in the central area are: the José Martí Park, the Paseo del Prado, the Arc de Triomphe, the Purísima Concepción Cathedral, the Tomás Terry Theater, the San Lorenzo College, the Benjamin Culture House Duarte, the Provincial Historical Museum, the Government Palace, The Founder's House, the National Naval Historical Museum, the Queen's cemetery, the Locomotive Museum, the Cienfuegos boardwalk, the statue of Benny Moré, the Sports Museum. While the Punta Gorda area stands out: the Blue Palace, the Cienfuegos Club, the Sculpture Park, the Palacio de Valle, the La Punta Recreation Center. A little further away is the monumental Tomás Acea necropolis, which is also interesting to visit. On the outskirts of the town is the picturesque Rancho Luna Beach, with its hotel complexes; the enclave of Santa Isabel de Lajas; the Jagua Castle, the Guanaroca Lagoon, the Cienfuegos Botanical Garden, the natural enclave of El Nicho, the Ciego Montero spa, Cayo Loco, Yamaraguas, and the Caribbean coast.

When to go?
It all depends on your tastes. If you are looking to enjoy the beach and diving, the best time is from January to April; but if you like the party, you will prefer to go between August and September, since that is when the Benny Moré Festival and the Cienfuegos Carnival are celebrated.

What to do in Cienfuegos?